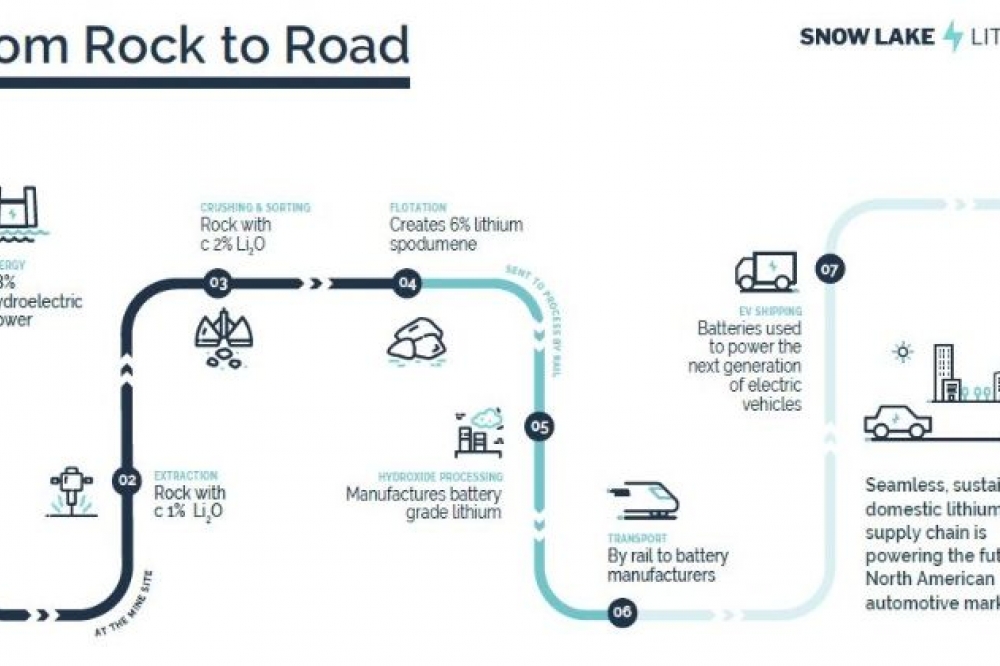 Snow Lake Lithium Ltd has outlined plans to develop the world’s first all-electric Lithium mine in Manitoba, Canada developing a domestic supply of this critical resource to the North America electric vehicle industry. With demand for electric vehicles growing rapidly, the global automotive and energy storage industries will be competing to access raw materials, especially lithium, that are a crucial component of batteries.

To enable the seamless integration of the supply chain, Snow Lake Lithium plans to establish a joint venture to create a lithium hydroxide processing plant and is seeking a partnership with an automotive OEM or a battery manufacturer to deliver this.

Philip Gross, CEO of Snow Lake Lithium said, “We are facing a once-in-a-century industrial pivot as North America accelerates towards an electrified future. If we don't act now to secure a seamless lithium supply chain from rock to road, the North American car industry will not exist in 10 years' time.

“Our ambition is to become the first fully integrated, carbon neutral lithium hydroxide provider to the North American electric vehicle industry. We are developing the world's first all-electric lithium mine, operated by renewable power, and are currently looking for a joint venture partner to create a lithium hydroxide processing plant in the region.”

Based in Manitoba, Canada, Snow Lake Lithium is ideally located to serve the North American automotive industry with access to the US rail network via the Artic Gateway railway, which reduces transportation from thousands of miles by road and boat to just several hundred by train.

Snow Lake Lithium's 55,000 acre site is expected to produce 160,000 tonnes of 6% lithium spodumene a year over a 10 year period. Currently, Snow Lake Lithium has explored around 1% of its site and is confident that this will expand over the course of the next year. Snow Lake Lithium's mine will be operated by almost 100% renewable, hydroelectric power to ensure the most sustainable manufacturing approach.

The Manitoba region has a rich history of mining giving Snow Lake Lithium access to some of the most talented and experienced miners in North America.

Philip Gross continued, “Mining runs through Manitoba's DNA, the evolution of the electric vehicles supply chain offers a once in a generation opportunity to deliver economic growth and secure a sustainable future for mining for the province. We are working closely with Manitoba Province to develop the right conditions to make the most of this opportunity.”

Over the coming months, Snow Lake Lithium will continue its engineering evaluation and drilling programme across its Thompson Brothers Lithium Project site, with the expectation that the mine will transition to commercial production in late 2024.

Wallbox To Be An EV Charging Partner Of Polaris In The U.S. And Canada
{inStory3}

Cities For People Not Cars - The Importance Of Public Transport Integration
Autonomy Solutions For High Traffic Destinations
LOSING CONNECTION: IS AUTONOMOUS TECHNOLOGY DRIVING US APART?
It’s Not Just About The Car: Six Keys To Delivering A Successful Autonomous Mobility Service
“FAILING WAS NOT AN OPTION”: THE ISRAELI ARMY, WOMEN & DRIVERLESS CARS
Why Everything Is Confusing Part 1: Market Disruption
IMPACT Connected Car Closes A Successful Call For Startups: 214 Applications From 39 Countries
Putting Customer Experience In The Driving Seat
How Mobility Services Are Helping European Cities Reach CO2 Reduction And Congestion Goal
Are UK Roads Ready For The Introduction Of Connected And Autonomous Vehicles?
Transportation’s Upcoming “Triple Disruption”
A New Solution To Integrate Electric Vehicle Charging Into The Urban Scape
{inStory4}
×